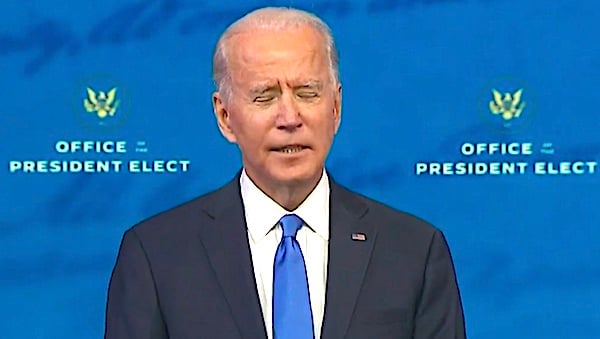 As President Trump’s term comes to an end, Democrats are frantically trying to remove him from office and ensure he won’t run again in 2024.

House Speaker Nancy Pelosi and Senate Minority Leader Chuck Schumer are urging Vice President Mike Pence to remove him through the 25th Amendment, and an impeachment vote is scheduled for Wednesday.

But he said Joe Biden should be.

“Free speech is under assault like never before,” the president said during a visit to the Mexican border wall on Tuesday. “The 25th Amendment is of zero risk to me, but will come back to haunt Joe Biden and the Biden administration. As the expression goes, be careful what you wish for.”

President Trump: “Free speech is under assault like never before.

The 25th Amendment is of zero risk to me, but will come back to haunt Joe Biden and the Biden Administration.

As the expression goes, be careful what you wish for.” pic.twitter.com/e7CeBOj0iK

He was referring to the bans by social media giants on him, his supporters and other conservatives, and the shutting down of an entire platform, Parler.

House members were to vote late Tuesday on a resolution urging Pence to invoke the 25th Amendment. The move requires support from Trump’s Cabinet and would allow the president to protest the decision.

Trump was visiting Alamo, Texas, the site of the 450th mile of the border wall that his administration is building. It’s short of the 1,000 miles of border wall that Trump had planned, but he’s faced opposition from Democrats and some Republicans.

The president addressed the riot that erupted at the U.S. Capitol last week after he held a rally in front of the White House.

“Millions of our citizens watched on Wednesday as a mob stormed the Capitol and trashed the halls of government. As I have consistently said throughout my administration, we believe in respecting America’s history and traditions, not tearing them down. We believe in the rule of law, not in violence or rioting,” he said.

Democrats charge in their article of impeachment that Trump incited insurrection, but many constitutional scholars contend his speech related to an effort to contest the election results was protected by the First Amendment.

It’s not the first time the 25th Amendment has been brought up in connection to Biden.

Before the election, Pelosi announced legislation to give Congress authority to intervene under the constitutional provision and remove a president. But she insisted at a news conference at the Capitol that it wasn’t about Trump but was prompted by a need for more congressional oversight of the White House.

At the time, she said Trump would “face the judgment of the voters.”

Trump fired back on Twitter, at the time, turning the tables and suggesting Pelosi’s real target was Biden.

“Crazy Nancy Pelosi is looking at the 25th Amendment in order to replace Joe Biden with Kamala Harris,” he wrote. “The Dems want that to happen fast because Sleepy Joe is out of it!!!”

The Democrats’ bill would have set up a 17-member commission to assess the president’s ability to carry out the duties of the office and ensure continuity of government.

The 25th Amendment was passed by Congress and ratified by the states in 1967 to help ensure continuity of power after the assassination of President John F. Kennedy.

It states that the vice president and a majority of the top officers of the executive departments “or of such other body as Congress” may declare to Congress that the president “is unable to discharge the powers and duties of his office.” The vice president would immediately become president.

Pelosi, at the time, claimed: “We would like to have it in place for future presidents. It’s not about the election at all. The timing is for now because people want to know based on a medical decision with the full involvement of the vice president of the United States.”

Crazy Nancy Pelosi is looking at the 25th Amendment in order to replace Joe Biden with Kamala Harris. The Dems want that to happen fast because Sleepy Joe is out of it!!!

The only one who needs the 25th Amendment is Nancy Pelosi herself.

Pelosi acknowledged in a “60 Minutes” interview Sunday that one of the motivations for impeachment is to prevent Trump from being a candidate in 2024.

The post Trump warns next president of 25th Amendment plot against him appeared first on WND.

1 Then Jerubbaal (that is, Gideon) and all the people who were with him rose early and encamped beside the well of Harod, so that…