The Trump administration brokered four historic peace deals between Israel and Arab nations, but President Biden’s press secretary declared Tuesday the “prior administration” did nothing to advance Middle East peace.

“The president has reinstated humanitarian assistance and security assistance to the Palestinians. That’s something that was stopped back in 2018, and we felt that was not a constructive action by the prior administration,” Psaki said in a briefing aboard Air Force One.

“Aside from putting forward a peace proposal that was dead on arrival, we don’t think they did anything constructive, really, to bring an end to the longstanding conflict in the Middle East,” Biden’s chief spokeswoman said.

However, the Trump administration argued the Abraham Accords between Israel and Sudan, Bahrain and the United Arab Emirates were struck precisely because the Arab nations abandoned the longstanding Palestinian veto. Separately, Israel and Morroco also normalized relations.

The Palestinians have taken an “all or nothing” negotiating stance, rejecting peace plans proposed by the administrations of presidents Carter in 1978, Reagan in 1982, Clinton in 2000 and the Trump in 2020.

Pathway to peace and prosperity

The Trump plan, along with a pathway to a Palestinian state, offered a Marshall-style $50 billion regional development plan for the Palestinian territories and nearby Arab states, noted Heritage Foundation scholar James Phillips, the think tank’s senior research fellow for Middle Eastern affairs.

More than half of the $50 billion would be invested in infrastructure and business projects in the Palestinian territories in the first 10 years. The remainder was to be invested in Egypt, Jordan and Lebanon.

The economic development program was designed to free the Palestinians from dependence on foreign handouts. But the so-called “deal of the century” was immediately rejected by Palestinian Authority President Mahmoud Abbas as the “slap of the century.” The Palestinians demanded a sovereign state controlling all the territory in the West Bank and Gaza, with a capital in East Jerusalem and recognition of the “right of return” for millions of Palestinian refugees to Israel.

The deal brokered by Clinton in 2000 essentially offered then-Palestinian leader all of that, with the exception of proposing a modified “right of return,” allowing refugees to return to the prospective Palestinian state instead of Israel proper.

But Arafat rejected it and instead launched the bloody second intifada, or uprising, against Israel. President Clinton then made a last-ditch effort, calling Arafat and Israeli leader Ehud Barak to the White House to offer a set of final peace terms, called the Clinton Parameters, to bridge the gap between the Israeli and Palestinian positions. Barak agreed while Arafat effectively said no, which many observers and the media regarded as a grave error.

The offer, as The Guardian reported in 2002:

The proposals included the establishment of a demilitarised Palestinian state on some 92% of the West Bank and 100% of the Gaza Strip, with some territorial compensation for the Palestinians from pre-1967 Israeli territory; the dismantling of most of the settlements and the concentration of the bulk of the settlers inside the 8% of the West Bank to be annexed by Israel; the establishment of the Palestinian capital in east Jerusalem, in which some Arab neighborhoods would become sovereign Palestinian territory and others would enjoy “functional autonomy”; Palestinian sovereignty over half the Old City of Jerusalem (the Muslim and Christian quarters) and “custodianship,” though not sovereignty, over the Temple Mount; a return of refugees to the prospective Palestinian state though with no “right of return” to Israel proper; and the organisation by the international community of a massive aid programme to facilitate the refugees’ rehabilitation.

And many Middle East analysts contend the restoration of aid to the Palestinians was among several Biden policies that contributed to the current conflict. Others include the delisting of the Iran-backed Yemeni Houthis as a terrorist organization, the restoration of aid to the anti-Israel and terror-supporting U.N. Relief and Works Agency and the reentering of talks with Iran, which finances Hamas weaponry.

The reason for Hamas’ existence, according to its charter, is to destroy Israel.  Hamas took over the Gaza Strip after Israel withdrew in 2005.

Trump administration Secretary of State Mike Pompeo charged Sunday that the latest attacks on Israel are the result of Biden going “back to the same failed policy” of the Obama administration. 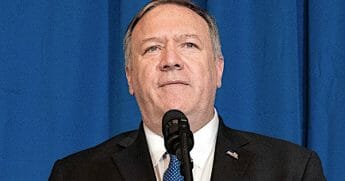 “Now the Hamas terrorists firing into Israel, I can’t believe that the Biden administration is headed back to the same failed policy that they had for eight years with respect to Iran and the larger Middle East,” Pompeo said Sunday in an interview with “The Cats Roundtable” on WABC in New York City.

Pompeo said Iran is funding its “proxy forces” with the ultimately aim of destroying Israel.

“The Iranians have made clear they have genocidal intent,” Pompeo said. “They want to wipe Israel off the face of the planet, and they use proxy forces – people like the Palestinian Islamic Jihad and Hamas.”

“The Israelis must defend themselves.”

“This makes the United States in a very awkward position of using U.S. taxpayer resources to support organizations that are terrorizing Israel,” he said.

It’s the reason the Trump administration “denied the Palestinians any money coming from the United States.”

“We put real pressure on the regime in Iran. We took down their economy in a way that denied them the ability to underwrite exactly these kinds of programs,” he said.

The Obama administration released $150 billion to Iran, he said, and now the Biden administration is considering payments to the Islamic state for a release of hostages.

“You can’t pay money. You can’t appease,” he said. “If you do, if you tell them, ‘hey take an American and we’ll write you a check,’ I can assure you, we’ll be writing more checks and they’ll be taking more Americans.”

The post Psaki claims Trump did nothing for Middle East peace appeared first on WND.