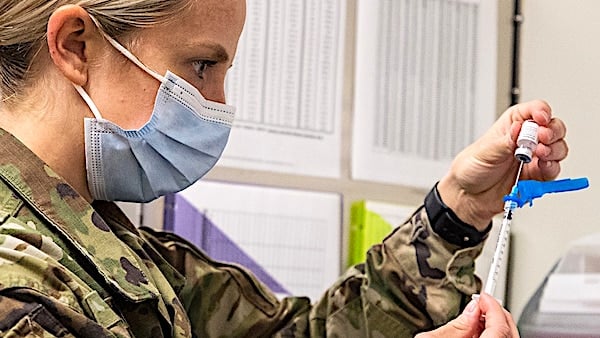 The COVID-19 vaccines that were developed when President Trump launched his Operation Warp Speed campaign to fight against the virus that apparently originated in China have proven helpful.

Infection rates, hospitalization numbers and death tolls have dropped where vaccination rates are high, even though they all are considered experimental at this stage because they’re being used under an emergency authorization.

But the Israeli Health Ministry now has confirmed a possible link between Pfizer’s COVID-19 vaccinations and something more serious: myocarditis.

Fox News reports the ministry has announced a “possible association” between the vaccine and heart inflammation among men ages 16 to 30.

“Three teams of experts investigated the potential link to cases of myocarditis and submitted findings to the Ministry. Results involved 275 reported cases of myocarditis from December to May, 148 of which occurred around the time of vaccination. Some 27 cases cropped up after the initial dose against a backdrop of 5.4 million vaccinated individuals, while 121 cases occurred around administration of the second dose,” the report said.

It said nearly all the cases were mild.

“There is some probability for a possible link between the second vaccine dose and the onset of myocarditis among young men aged 16 to 30,” the ministry said. “This link was found to be stronger among the younger age group, 16 to 19, compared to other age groups. This link became weaker the older the vaccinated individual is. In most cases, myocarditis took the form of mild illness that passed within a few days.”

The Centers for Disease Control also has officials monitoring cases of myocarditis that follow the vaccinations, but they report not having determined a link yet.

WND reported earlier that the Palestinian Authority has unleashed a “coronavirus-libel” against Israel, become of the pandemic.

According to Palestinian Media Watch, “The PA has found the silver lining of the COVID-19 pandemic by using it to breathe new life into its medical libel, according to which Israel mistreats terrorist prisoners and intentionally murders them through neglect and denial of treatment for their illnesses.”

The PA purports that Israel is now using COVID-19 as “a lethal weapon” to implement its “policy” of “murdering the prisoners,” PMW said.

According to a statement broadcast on official Palestinian Authority TV, the prisoners are in danger.

“The prisoners in the occupation’s prisons are being subjected to a policy of deliberate medical neglect (sic) by the [Israeli] prison authority, which is a lethal weapon and one of the means to slowly physically and psychologically murdering the prisoners. This policy has led to the death as a Martyr of more than 70 prisoners in the prisons since 1967,” the PA TV report said.

It alleges the “occupation” by Israel “is deliberately transmitting the virus to the prisoners through its [Israeli] prisoners.”

PMW explained the allegations themselves are impossible, “as Israel keeps Palestinian terrorist prisoners – the so-called ‘security prisoners’ – strictly separated from the rest of the prisoner population.”

“Moreover, Israel has in fact vaccinated Palestinian prisoners who wanted the vaccine – including murderers, some of whom even received the vaccine before the families of their Israeli victims were eligible to it within the Israeli vaccination program,” the report said.

“Finally, no Palestinian prisoner has died of COVID-19.”