ORLANDO — For House Republicans, it’s less about how they can win back the majority and more about: How do they avoid messing things up?

That’s the question on the minds of GOP lawmakers as they huddle in America’s theme park haven for their three-day annual legislative retreat — the Republican conference’s first such gathering since the coronavirus shut down the country and their first since former President Donald Trump lost the White House.

Republicans are, to put it mildly, feeling good about their chances of retaking the chamber next year, following a better-than-expected showing in November’s House races that ushered in a freshman class led by GOP women and minorities. In 2022, the party only needs to flip a handful of seats, with both history and forthcoming redistricting on their side. And President Joe Biden has, through a series of ambitious early moves, helped his opponents coalesce around a midterm messaging strategy that hits Democrats on immigration, taxes and policing.

But Republicans also know the next 18 months are littered with political tripwires, from internal divisions over the former president trying to influence them from Mar-a-Lago to the fringe elements in their ranks that threaten to swamp their agenda. Democrats are trying to fan those flames across the aisle by yoking the entire GOP to QAnon and, at every turn, elevating some of the conference’s most divisive personalities, such as freshman Rep. Marjorie Taylor Greene (R-Ga.).

House Minority Leader Kevin McCarthy, who has adopted a big tent approach to keep his troops united, is eager to paper over those problems in his quest to win back the House — and with it, the speaker’s gavel. So for the next three days in the Sunshine State, GOP leaders are determined to keep the spotlight on their policy plans and away from the party’s most extreme names, in effect previewing the strategy that they think can clinch them the majority next fall.

“There’s going to be a very substantive policy focus,” House GOP Conference Chair Liz Cheney (R-Wyo.) told reporters back in Washington before the gathering’s Sunday kickoff. “What we have to do as Republicans is get back to being the party of ideas and the substance and the policy of conservatism, and that’s going to be a big part of the retreat.”

Of course, that may be easier said than done. One day before the retreat, Greene headlined a Florida rally where she revived Trump’s false claims of voter fraud, which have been a sore spot for the GOP. Fresh off the controversy surrounding her now-defunct pitch for an “America First Caucus" built on nativist rhetoric, Greene had little interest in heeding her leadership’s policy-first entreaties.

“No matter how upset you are about the presidential election and no matter what you’re seeing in the news, it’s not over,” Greene told the crowd in Vero Beach, according to the local Treasure Coast Palm newspaper.

The rally’s Greene-led lineup quite literally put the GOP’s internal divisions on display. Participants included some GOP candidates who are mounting primary challenges to anti-Trump Republicans, including Cheney.

Senior Republicans, however, are determined not to lose focus this week.

“The fact is, our party is much more unified when we focus on policy rather than personalities,” said Rep. Patrick McHenry (R-N.C.). “And the substance of governing is driven by policy in the midst of politics. So you still have to have ideas and policy of consequence to the American people.”

McCarthy is hoping to use the Orlando meeting to unify his members around a policy agenda that can pave their road back to power. He set up seven breakout sessions for members throughout the retreat that will be focused on issues such as China, health, Big Tech and the economy. Each session will be led by a different lawmaker with expertise in that area, McCarthy said.

“This will be a working conference,” McCarthy told POLITICO. “We’ve got seven different task forces that we’re gonna name for members to be working on.”

Party retreats, which are sponsored by the nonprofit Congressional Institute, have sometimes yielded important progress. During a retreat in 2014, the House GOP hashed out an accord on the hot-button topic of immigration. And during House Republicans’ last gathering in Baltimore, they ironed out some lingering disagreements over their online fundraising platform, WinRed, which has since proven instrumental to the party’s successes with small-dollar donors.

For the most part, though, retreats serve as a morale-boosting moment for Republicans while providing an introductory course for the freshmen. After a year of public health-based restrictions, House Republicans are especially eager to let loose in Florida, where GOP Gov. Ron DeSantis has become a hero in the party for championing more relaxed Covid restrictions compared to blue cities like D.C. 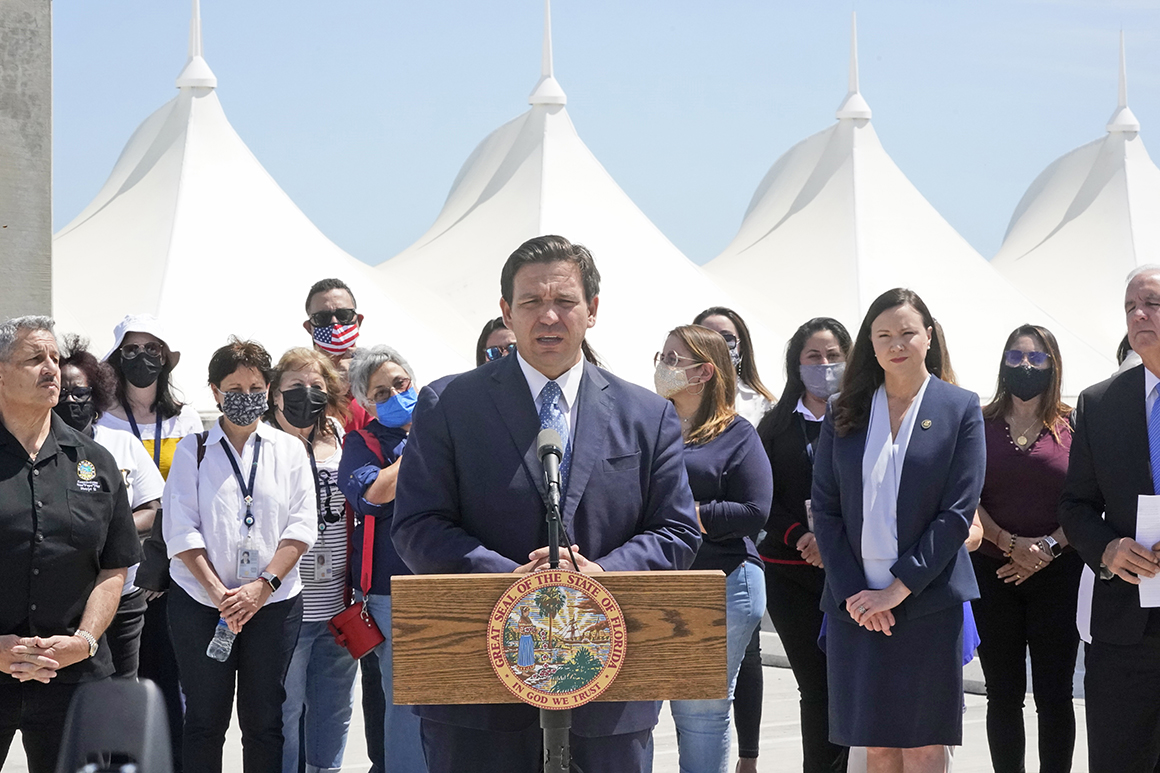 “Simply gathering in one place is strangely enough,” said McHenry. “The fact that we’re able to have a conversation, the fact that people are vaccinated and therefore safe to interact almost normally, is a huge difference-maker.”

“This whole institution runs better when people have some sense of understanding what other people are thinking,” he added.

One Florida resident won’t be showing up: Trump.

“I didn’t invite him,” Cheney told reporters in Washington, prompting a round of laughs. Cheney was one of 10 Republicans who voted to impeach Trump. She’s also lambasted Trump in multiple public comments since the Jan. 6 attack on the Capitol.

Her quip, while lighthearted, masks a more serious conundrum facing Republicans: what role, if any, the former president should play in the GOP. The party’s own leaders are split on the topic.

Cheney has doubled down on her criticism and noted that Republicans lost the House, Senate and White House on his watch. Across the Capitol, Senate Minority Leader Mitch McConnell has taken his own steps to distance his members from the former commander-in-chief, even as Trump lobs insults.

But McCarthy has trekked to Mar-a-Lago in an effort to stay in Trump’s good graces and wants to tap into the former president’s popularity with working-class voters. The Californian sees Trump as a future fundraising goldmine for the GOP.

As the retreat began on Sunday, McCarthy got reminder of Trump’s continued strain on party unity. Illinois Rep. Adam Kinzinger — one of 10 House Republicans who voted to impeach Trump after the Jan. 6 Capitol attack — responded in a one-word tweet to McCarthy’s avoidance of a question about his mid-riot conversation with Trump.

"Unacceptable," Kinzinger wrote about his own leader.

No matter their spot on the party’s ideological spectrum, Republicans agree that both the pro- and anti-Trump camps will need to put their differences aside in order to win back the House majority.

“The worst thing that we could do, with respect to unity, is for those who might not have supported President Trump [to] throw the baby out with the bathwater … even if they don’t care for his style and personality,” said Rep. Jodey Arrington (R-Texas).

But, he added, “we have to learn from his mistakes, too. He’s not perfect. So: learning the lessons, both good and bad.”

In the civil war between Donald Trump and the GOP’s waning establishment, no Republican has crossed the former president and come out ahead. Yet as…