Democrats are readying a final vote on President Joe Biden’s $1.9 trillion pandemic aid package Wednesday, executing on the measure in less than eight weeks — and making a political bet on mammoth federal spending to boost the economy.

The House will vote Wednesday morning on the bill, which Budget Chair John Yarmuth (D-Ky.) described as "one of the most consequential pieces of legislation in modern history."

"It’s nothing short of a miracle that we have gotten to this point," Yarmuth said, standing alongside a half-dozen other top Democrats who were ebullient as the House inched toward final passage. Several compared the Covid aid package’s size and scope to that of the Affordable Care Act.

Speaker Nancy Pelosi (D-Calif.) and her leadership team, who spent the weekend working the phones with their members, are confident they will have the votes for one of Congress’s largest-ever economic relief bills. They’re set to once again contend with unified GOP opposition that will brand Biden’s rescue package as a Democratic offering ahead of next year’s midterms, when Republicans could recapture the majority by flipping just a handful of seats.

In the House, which will send the bill to Biden’s desk, the Rules Committee met Tuesday afternoon to tee up the bill for a floor vote Wednesday after Senate officials took longer than expected to send over the necessary paperwork. But Democrats vowed a one-day delay would not have an impact on boosted jobless benefits set to expire this weekend.

“We’ll pass it, it’ll get signed into law by the 14th and we’ll get people relief,” Rep. Pete Aguilar (D-Calif.), a member of Democratic leadership, said when asked if Congress might miss its March 14 deadline to extend the extra federal jobless aid.

Major provisions of the legislation do command significant public support, and a recent Associated Press-NORC Center for Public Affairs Research poll found 44% of Republicans approving of Biden’s handling of the coronavirus. His plan includes a massive expansion of the social safety net intended to buoy the nation’s lowest-paid and most vulnerable people, who have faced the brunt of the pandemic. It also includes $1,400 stimulus checks for most Americans — the direct result of Democrats’ pair of shocking wins in the Georgia Senate runoffs earlier this year.

Already, Democrats are predicting that some of their programs could become permanent. House Ways and Means Committee Chairman Richard Neal (D-Mass.) told reporters Tuesday that he believed Congress would keep the massive expansion of the child tax credit.

The bill is, in a sense, a gamble on the party’s future. Democrats are on track to approve nearly $2 trillion without a single Republican vote, giving their opponents a fat target for criticism ahead of an election when historical headwinds will be working against them. Congress passed four major coronavirus relief packages before Biden took office, including one just weeks after the November election, but the GOP has rejected this one as too much money at a time when the U.S. might soon be able to move past the pandemic.

No House Republicans voted for the Democrats’ package when it first came to the House late last month. After a fierce whipping operation by GOP leaders, none are expected to back it this time, either.

Democrats have shrugged off the GOP’s lack of support for the Covid aid plan, and Pelosi predicted Tuesday that Republicans would "take some credit for it in their districts."

The bill requires a final vote in the House after a marathon weekend session in the Senate, where Democrats agreed to a handful of changes in order to win over centrists.

House Democrats are expected to narrowly approve the Senate’s version of the bill, which stripped out a hike in the federal minimum wage to $15 an hour — a long-time priority for progressives — after it ran afoul of the chamber’s budget rules.

Liberal Democrats fumed at that and other trims the Senate made, including the decision to shrink the bill’s weekly boosted unemployment benefits to meet a demand by Sen. Joe Manchin (D-W.V.). The bill now provides $300 a week in extra benefits through Sept. 6, down from $400 a week in the House plan. The Senate bill also allows for $10,200 in tax relief for unemployed workers.

Frustrations aside, no liberal Democrats have so far said they would vote against Biden’s first legislative priority.

Rep. Pramila Jayapal (D-Wash.), who chairs the Congressional Progressive Caucus, said she fielded calls from concerned members over the weekend but has made clear to her caucus that the bill remains “a big progressive win.”

Jayapal said she personally called Senate Majority Leader Chuck Schumer (D-N.Y.) on Friday morning when it looked like Democrats might relent to a GOP proposal on unemployment aid and told him: “We cannot weaken this thing any more, or I don’t know what’s going to happen in the House.” 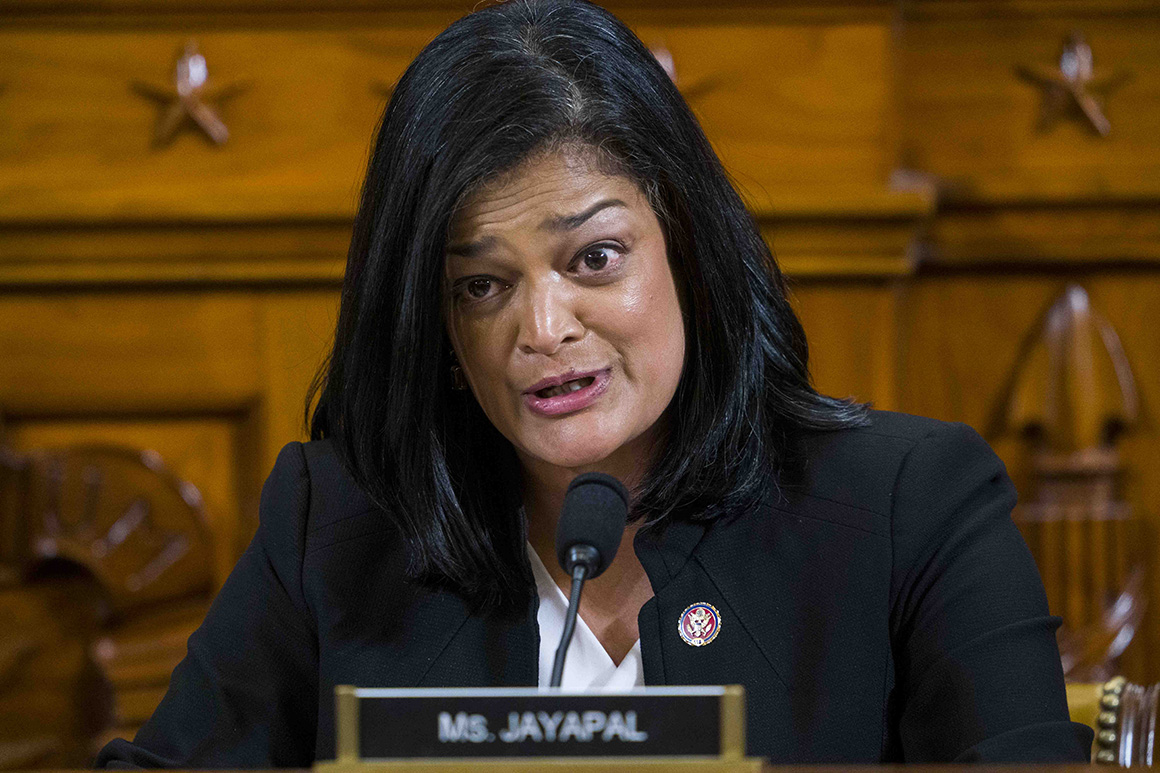 Jayapal said the Senate changes proved “relatively minor in the grand scheme of things,” with the exception of the minimum wage hike — a loss the left had already been bracing for. To get the wage raised, she said, "this makes it clear that we’ll have to reform the filibuster.”

House passage, whether Tuesday or Wednesday, would deliver on Biden’s top policy ambition from the 2020 campaign: a rapid investment in vaccines, school reopenings and other public health measures intended to revive an ailing economy.

Schrader announced Monday that he plans to support it after the Senate’s changes, noting that he still has concerns about "the size and scope" of the bill but says "the Senate changes provide meaningful relief for Oregonians in need."

Still, whether or not the party is fully united on the final vote, most Democrats argue that they’re making an informed leap toward spending that’s designed to combat virus-era job losses on par with the depths of last decade’s Great Recession.

“When people get the money, they’re not going to admire it in their bank vault. They’re going to spend it,” Rep. Raja Krishnamoorthi (D-Ill.) said. “That’s going to multiply the economic impact, and it’s going to be hugely beneficial.”