KENNETT SQUARE, Pa. — Rep. Chrissy Houlahan sat down at a sunshine-drenched picnic table and gave her best sales pitch to two single moms who’d just had one hell of a year.

The women at the town park listened politely as the Pennsylvania Democrat outlined some of the benefits they’ll see from President Joe Biden’s nearly $2 trillion pandemic relief package. Jobless benefits, stimulus checks, child tax credits: Houlahan unspooled her list, then added: “Did we get it right? Did we miss some stuff?”

But the two moms weren’t up for giving Congress a report card on Democrats’ popular legislation. They wanted their congresswoman to tell them how long the government’s help would last, and when more would come.

“A lot of families were struggling before Covid,” said a third woman at the table, Cheryl Miles, a local housing advocate whose nonprofit has seen surging demand even in some of the state’s wealthiest counties.

Houlahan is one of more than 80 House Democrats who returned home this spring recess for a high-stakes legislative promotional tour — trying to educate voters about the billions of dollars in new benefits that their party’s coronavirus recovery plan would bring, with its fragile House majority at stake next fall. But a four-day swing across the Keystone State to visit three of its potentially vulnerable House Democratic incumbents showed that their sales pitch is more complicated than the classic political victory lap. After all, the pandemic isn’t over, millions are still out of work and the pace of vaccinations remains uneven.

Houlahan’s park bench sit-down in a tiny southeastern Pennsylvania suburb was one of multiple constituent talks she held during a multiday trip across her district to showcase Biden stimulus money at work and check on its progress. She met with working parents who’ve lost jobs and child care centers with staff shortages, showing some voters are a long way from hopeful as a huge tranche of federal aid is still trickling out. 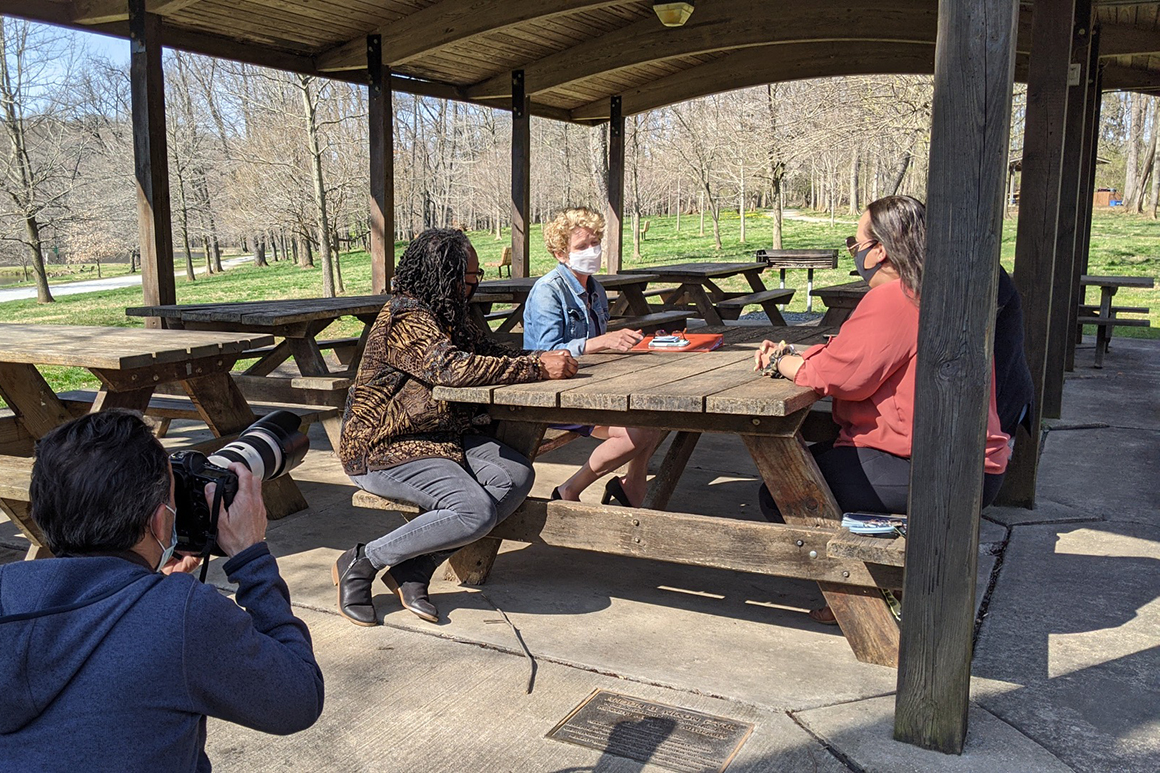 And Houlahan’s constituents weren’t alone during the recess: Rep. Susan Wild fielded questions at a tele-town hall about backlogged rent bills despite the eviction moratorium and met with restaurateurs struggling to recruit staff. Rep. Matt Cartwright heard an advocate at a children’s health center in Wilkes-Barre, Pa., describe the Democrats’ bill as only a “first step.”

As these Democrats traversed their districts, most holding their first in-person events in over a year, they talked with grateful health officials, mayors and shop owners who heaped praise on the $1.9 trillion aid bill — even as nearly all said that more would need to be done.

This month’s rollout of the pandemic aid bill in districts across the country amounts to an opening salvo in the messaging battle over Biden’s recovery plan, which will likely play out over the next two years as the two parties jockey for control of the House next November. The bill is so broadly popular that many Democrats believe it could help stave off the midterm blowback that typically hits the party in the White House during a president’s first term, and many in Biden’s party say they’ve learned lessons from Obama-era messaging flops that played a role in 2010’s GOP House takeover.

But strong public buy-in aside, Democrats are bound to face challenges using the same messaging campaign in districts as different as those along Pennsylvania’s eastern side. Houlahan, Wild and Cartwright are defending turf in shrinking blue-collar neighborhoods, lush green farmland, and bustling college towns, all battling dramatically different side effects of the pandemic.

Sometimes the conundrum is mostly logistical: Several of the Biden aid package’s most significant provisions, such as an expansion in the Child Tax Credit, are the hardest to explain to constituents. Other benefits in the massive bill haven’t arrived yet, and many Pennsylvanians seemed more focused on the spotty vaccine rollout or the governor’s tight Covid restrictions.

Other townships, deep in the state’s Donald Trump country, offer a political hurdle. There, Democratic incumbents must combat GOP arguments that Biden’s Covid bill is a "liberal wish list" poised to rack up debt and drive up inflation. Republicans — who unanimously opposed the aid measure in Congress — have bought billboards and other ads in districts, including Wild’s, to hammer Democrats on school reopenings.

“There’s this narrative of, ‘Oh, this isn’t Covid relief’, or ‘Some small part of it went to the disease.’ Fair enough," Houlahan said in an interview during a stop in an area of West Reading, Pa., with a high concentration of poor families. "But the consequences of this pandemic have just been so expansive, that the response to it has to be, too."

The "ginormous and complex" scope of the bill, she added, is why she planned recess visits to locations as diverse as a mushroom farm racing to vaccinate its workers, a brewery that stayed afloat with a pandemic relief loan, and a Head Start center that’ll use its aid funds to hold in-person summer sessions.

Democrats are fighting GOP attacks more broadly, too, with the caucus’s campaign arm and allied outside groups spending big on ads to promote the mammoth rescue bill in Pennsylvania and other battleground states.

By all accounts, the Biden Covid aid plan should be an easy sell: More than 7 in 10 Americans already support it, according to a POLITICO/Morning Consult poll late last month. But that includes just 44 percent of Republicans, a group critical for Democrats in the nation’s toughest swing districts.

Cartwright is one of those Democrats. His sprawling northeastern Pennsylvania district leans Republican, and though it includes Biden’s hometown of Scranton, the president lost the district to Trump by almost 5 percentage points last November. (Cartwright won by 3.6 points.)

As a leader of the House Democrats’ messaging arm, Cartwright spends a lot of time thinking about outreach. And in districts like his, a big part of the job isn’t about convincing people that the bill is popular or that Democrats deserve credit, but about reaching those who aren’t listening to start with.

That includes lesser-known benefits in the bill, such as an expansion of the Child Tax Credit that essentially created a guaranteed monthly income for parents.

“Now, not everybody knows what that is. But it is support for families with children through the Internal Revenue Code. And you never thought the IRS was your friend,” Cartwright explained during the visit to the children’s health center in Wilkes-Barre, speaking directly into the local TV camera.

Later, Cartwright said his constituents have reacted positively to both the tax credit and the broader bill, provided that they are aware of its full impact.

“That’s job one — to get the word out about them accessing the benefits. And, if along the way, they realize that Matt Cartwright helped get them that, it doesn’t bother me at all. I’m proud that I did it,” Cartwright said in an interview. “You have to tell people and make sure they know what you’re doing. And if they decide it’s a good thing, they’ll give you credit.”

Farther south in Pennsylvania’s Lehigh Valley, Wild represents a cluster of small cities and towns that offer a glimpse of the competing needs that Biden and Democrats in Congress must juggle in the pandemic aid debate.

On a tour of restaurants along the bustling downtown of Bethlehem, a local business representative boasted that the area hadn’t lost a single shop. But several other owners complained that they can’t find enough labor — with some forced to turn away customers — because of what they say are overly generous federal jobless benefits. One chef remarked to Wild and her staff: “We’re working harder, at a higher cost, for less money.”

Wild, who had fought hard to secure a massive $120 billion restaurant relief fund in the last package, spent much of her time talking to owners about what more could be done in the months ahead. She later acknowledged the central sticking point in Democrats’ salesmanship of the recovery plan.

“The needs are almost beyond comprehension,” Wild said in an interview. “No matter how much we work on and how much we’re able to pass, there’s always a segment of society that has not seen the benefits.”