A leading Republican hard-liner clashed behind closed doors with House GOP Leader Kevin McCarthy on Wednesday, exposing a rift in the Republican conference and suggesting that a chamber-rattling floor protest by the far right isn’t fading anytime soon.

During a closed-door conference meeting, House Freedom Caucus Chair Andy Biggs (R-Ariz.) went after McCarthy for not being more supportive of a conservative-led effort to force a series of lengthy — and largely fruitless — procedural votes that have snarled the floor, according to sources in the room.

McCarthy, who has been urging Republicans to adopt a more tailored approach, countered that the delaying tactics could actually prove counterproductive by resulting in fewer GOP bills getting passed. The California Republican wanted to have more of a dialogue, but Biggs wasn’t interested and made clear he still plans to push ahead with his procedural gambit, sources said.

McCarthy also urged Republicans to be unified on party messaging. He called attention to GOP efforts to spotlight the growing crisis at the southern border, where a wave of unaccompanied migrant children has crested since the start of the Biden administration.

Sources say that during Wednesday’s GOP meeting, Biggs responded that some members have been visiting the border for years and didn’t just show up there recently — a not-so-subtle dig at McCarthy, who led a GOP delegation to the border earlier this week.

“I didn’t think anything was heated. People are passionate,” Biggs said after the meeting, though he declined to discuss what happened inside. “If we won’t use every procedural tool in the toolbox we have … yes, that frustrates me.”

Biggs added that, as a member of the minority party, “You’ve got to get in the way and try to slow things down as much as you possibly can.”

In recent weeks, a small slice of rebellious Republicans have been requesting recorded House votes on non-controversial bills and forcing votes on motions to adjourn, causing headaches for their colleagues and scrambling the floor schedules as members are forced to drop everything to make it to the floor. Those Republicans say they’re reflecting broad frustration with how Democrats are running the House, from the lack of GOP amendment opportunities to the razor-wire fences erected around the Capitol.

The ongoing dispute over floor procedures is a wonky but critical one for House leaders of both parties. If GOP lawmakers refuse to relent in their delay tactics, it would mean a slog of roll-call votes on the most mundane of issues — forcing lawmakers into a new way of life where half of their days are spent shuffling on and off the House floor.

Rank-and-file members said they increasingly fear that the House schedule will devolve into chaos, with Democrats struggling to keep proceedings orderly as GOP lawmakers seek to disrupt the day on a whim.

House Majority Leader Steny Hoyer told Democrats during a caucus-wide call on Wednesday that he is working closely with McCarthy to resolve the issue. Hoyer said Democrats would deploy some kind of formal effort to halt the GOP tactics when the House returns after its upcoming recess.

"By the time we come back in April, we will have resolved the [Republican] obstruction via negotiation or by a change to the rules,” Hoyer said, according to people on the call.

Senior Democrats say it’s not clear exactly what a rules change might look like, or whether it would actually work to prevent House Republicans from forcing votes on every single noncontroversial bill. 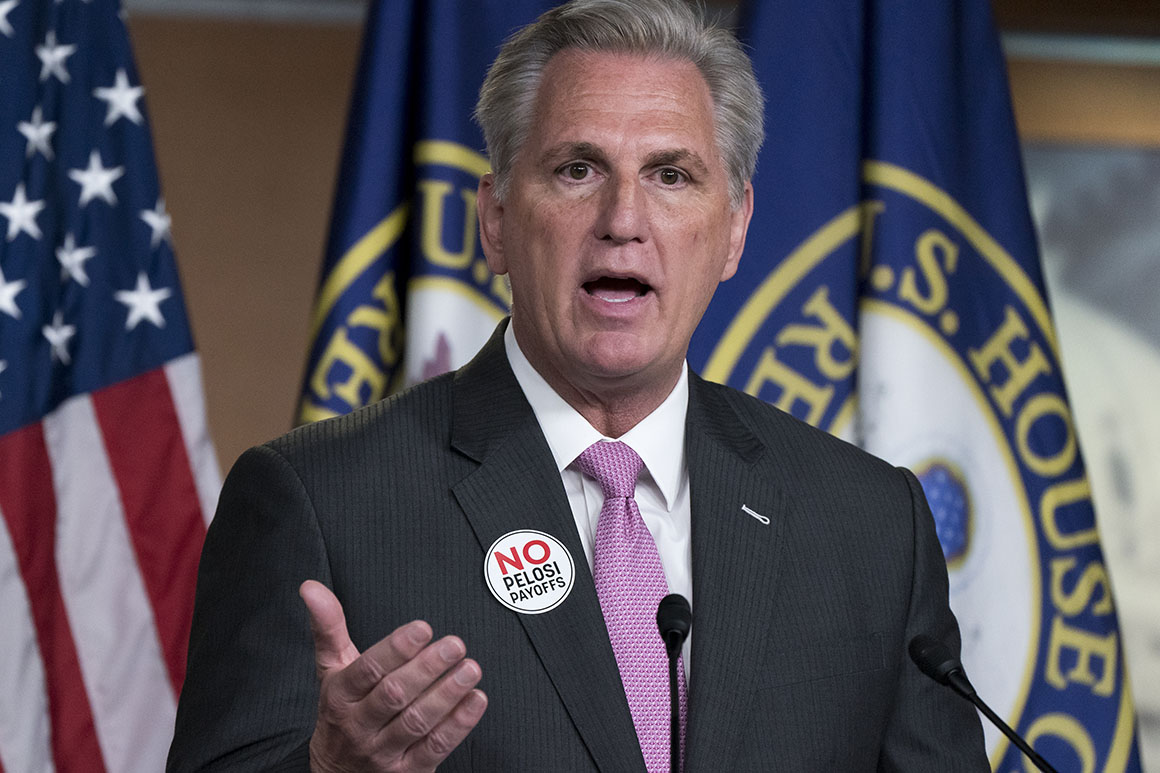 House Rules Chairman Jim McGovern (D-Mass.) said he’s discussed the issue with both Hoyer and House Speaker Nancy Pelosi and will try to "find the best way forward" in the next few weeks.

"Without getting into the details, there are options. But here’s the deal: It’d be nice if the minority leader would tell some of his members to behave like grown-ups," McGovern said.

"This is serious work we’re doing. These are serious debates we’re having. And most complaints I’m getting, quite frankly, are from Republicans. Because they’re annoyed."

And many Democrats, as well as a growing number of Republicans, worry that GOP hardliners are showing no signs of backing down anytime soon.

When asked if he intends to plow ahead with the strategy, Biggs responded: “Yeah. You have to keep pushing and trying like a son of a gun to slow them down.”

Frustration with the slowdowns has mounted for weeks, after an already grueling month of House votes was made worse for members by GOP delay tactics. Because of the pandemic, every vote takes about 45 minutes or longer, so a few additional roll-call votes can drag out each day’s floor time by hours — often late into the night.

It’s not just a dispute over process holding things up. Several conservatives have substantive complaints about some of the bipartisan bills that were scheduled for speedy floor votes — including legislation to award congressional gold medals to the Capitol Police for their service during the Jan. 6 riot.

Some Republicans are unhappy with language in the gold medals bill that calls the Capitol “the temple of our American Democracy” and labels the attackers as “a mob of insurrectionists.”

“These words all matter, right?” Rep. Chip Roy (R-Texas) told POLITICO. “We are looking at it, we will figure it out… I have to study the language fully.”

Roy said “a few” others in the ultra-conservative Freedom Caucus feel the same way he does, while noting that there are “a wide variety of opinions” on the issue.

Rep. Louie Gohmert (R-Texas) is now circulating a competing bill to honor the Capitol Police that doesn’t mention the Capitol attack or Jan. 6, according to a copy obtained by POLITICO.

“We mourn the losses of Capitol Police Officers Brian Sicknick and Howard Liebengood, and Metropolitan Police Department Officer Jeffrey Smith, who all passed in January 2021,” a draft of the bill reads, naming officers whose deaths are connected to the riot. “The sacrifices made by each of these men are never forgotten in the U.S. Congress and by the many individuals who benefit from their service.”

The spat is threatening to turn even one of the most non-controversial issues Congress will face this year — honoring its police force — into a partisan slugfest.

“Our whole goal is to take back the House. And you need a good strategy to do it,” said Rep. Don Bacon (R-Neb.). “The leader’s made a plan that he thinks will get us there. And so you don’t want to have 10, 15 different people doing their own plan. … So I agree with the leader.”

House Republicans warned Democrats not to weaken one of their few powers in the minority. Now the GOP is seeking procedural payback. A frustrated slice…